Vendor List|Privacy Policy
Skip to content
This post contains affiliate links. If you click on any of these links to make a purchase, I may earn a small commission at no extra cost to you.

This post may contain affiliate links. If you click on a link to make a purchase, I may earn a small commission at no cost to you.

What Are the National Symbols of South Africa?

The South African Coat of Arms

This elegant coat of arms has a contemporary design with an egg shape. In the lower part of the design, called the oval shape of the foundation, the motto is included in a green curve, completed by two symmetric elephant tasks facing upwards. This oval shape has two symmetrical ears of wheat that symbolise fertility and frame a gold shield, which looks like a drum. The shield has two human figures from the Linton panel of Khoisan rock art, and they face each other in unity and greeting.

Above the shield, you can find a spear and a knobkierie (or cane) that cross in a single unit, but they are symbols of peace since they are lying down.

Above the foundation shape is a stylised protea with triangular petals, often used in African crafts. The green, gold, black and red colours represent the African continent.

Above the protea is a secretary bird, with the flower forming the bird’s lower body and chest. The bird’s chest looks like a diamond, something South Africa is known. The secretary bird can fight its enemies while lifting its wings. The spear and knobkierie form the bird’s legs. There is a rising sun between the bird’s wings, which completes the oval shape of ascendancy.

The National Flag of South Africa

South Africa’s current national flag was adopted on Freedom Day, 27 April 1994, and was first flown on 10 May 1994, on former president Nelson Mandela’s inauguration.

The central design of the flag starts at the flag-pole side with a V-shape. From there, it glows into a single horizontal band to the outer edge of the flag. This shape shows the convergence of diverse South African elements, representing unity for the road ahead.

The National Anthem of South Africa

The National Orders of South Africa

If someone has been brave or provided exceptional service to South Africa, they qualify for a nomination for national orders. The National Orders Advisory Council considers nominations and invites successful nominees to an awards ceremony.

The National Flower of South Africa: The King Protea

The King Protea is South Africa’s national flower. You can find it in the Western, Southern and Eastern Cape provinces. The Latin name is cynaroides, which means like-Cynara (artichoke). King Protea flowers have an artichoke-like appearance and can grow up to 2 metres (6.6 feet) in height. The King Protea flowers in the late spring when it displays its beautiful red and pink colouring. The plant is tall and woody. It is an evergreen shrub with thick stems and large, dark green and glossy leaves.

The National Tree of South Africa: The Real Yellowwood Tree

The Real Yellowwood Tree is South Africa’s national tree. The Yellowwood tree is protected in South Africa. The tree has beautiful timber, which is perfect for furniture.

The yellowwood tree species has been growing in South Africa for over one million years. You can find it throughout South Africa, but it is common in Table Mountain, the Drakensberg, Soutpansberg and Blouberg in Limpopo, and along the eastern and southern Cape coast.

The Yellowwood tree can reach 40 metres and has a thick base of up to 3 metres in diameter. When it grows in unsheltered areas, they have a bushy, gnarly and short appearance. The bark of the Yellowwood tree becomes greyer as the tree gets older.

The tree’s fruit looks like a pine cone but is white, light green or pink. The yellowwood tree has both male and female fruit, and the female fruit cone looks similar to a cherry in colour and shape.

The National Animal of South Africa: The Springbok

The national animal of South Africa is the Springbok. It is the best-known antelope of South Africa. The Springbok (Antidorcas marsupialis) gets its name from its spectacular leaping displays where it jumps vertically in the air while showing its white rump. It can run at speeds of about 88km/hour or 55 miles per hour.

The Springbok is a vegetarian buck and can grow up to 75cm in height and weighs about 40kg. Both sexes develop horns, but the male Springbok or ram’s horns are rougher and thicker. Springboks can live in both dry, barren areas and open grass plains. You can find it in the Free State, North West, Northern and Western Cape provinces of South Africa. You can also find Springboks in other African countries in Southern Africa, including Botswana, Angola and Namibia.

In South African Scouts, the highest award is the Springbok Scout Award. It is also the name of the South African rugby team, fondly called “the bokke” or “boks”.

The National Bird of South Africa: The Blue Crane

South Africa’s national bird is the blue crane (Anthropoides paradisia). South Africa has most of the blue crane’s global population. The blue crane is about a metre tall and is light blue-grey. It has a long neck to support its bulbous head. It also has thin, long legs with elegant wing plumes, which sweep to the ground.

You can find the blue crane in the Karoo, highveld and KwaZulu-Natal. They typically stay in pairs or small groups and eat seeds, insects and reptiles. Blue cranes lay eggs in the bare veld, usually close to water. The blue crane is a quiet bird but can emit a high-pitched, rattling croak.

The National Fish of South Africa: The Galjoen 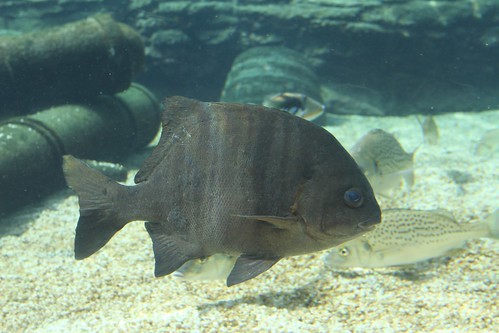 South Africa’s national fish is the Galjoen (Dichistius capensis), also called black bream or blackfish. You can find the Galjoen along the South African coast, keeping to shallow water and rough surf. It is the only area in the world where you can find the Galjoen. The Galjoen can change its colour from almost black near rocks to silver-bronze in sandy areas. Galjoen feed on red bait (ascidians) and small crustaceans (mussels and barnacles). The Galjoen is round and thin, and it has a saucer-like body, which can reach 80 cm (31.5 inches).

What Are the 11 Official Languages in South Africa?
Share this:

View all of Sunelle's posts.